Most developers around me despise Entity Framework for being complicated, bloated and slow. Those people point out to light-weight micro ORMs like Dapper. I hear this all time. At work, user groups. Look, EF executes query in 631 ms while Dapper in 49 ms, why would you not want to user Dapper? I don't want to take side in this argument even though, having worked with EF for many years, I am clearly biased. I think that both frameworks have their own niche and use cases, but I was surprised what I found after swapping EF for Dapper.

We've been using my code metrics solution with EF for almost two years. Part of it is a loader that collect various metrics and saves object graph to a dozen of tables that look like this: 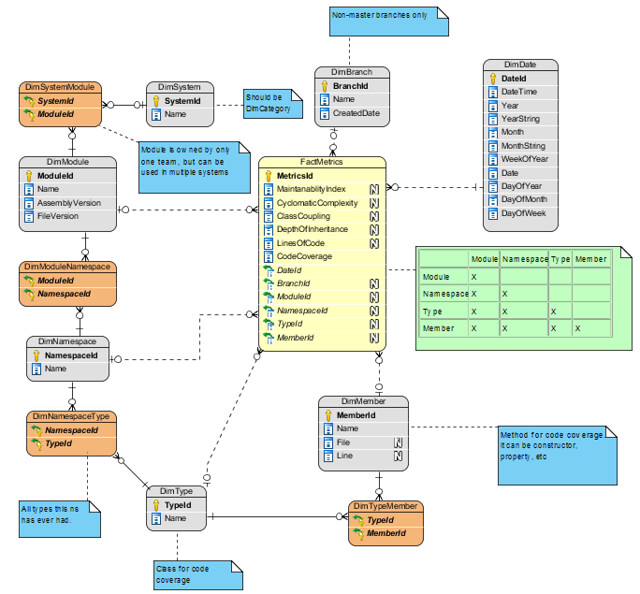 The schema is not important, but it has quite a bit of many-to-many to relationships and the loader reminds tooth ache - it runs over eight hours. We event changed our Jenkins data collection jobs to run earlier in the day to avoid running it pass midnight.

And I thought, this is going to be straightforward. Let me swap my old friend Entity Framework for Dapper. I have an integration test that wipes out database and uploads small dataset. I created a separate branch for Dapper and run that integration test in both branches. Here are the results:

Dapper turned out to be 20% slower while requiring 42% more code and the kind of code I didn't enjoy writing:

And it's not so much additional code, but the repetitive code to insert modules, namespaces, types, many-to-many tables, while in EF version I could have a single generic method to take care all of them:

One could argue that I should have used stored procedures. Perhaps I could shave some time, but I don't what stored procedures because they have to be deployed, parameters matched up and so on.

It is possible that I am missing something, but here are EF and Dapper versions for the reference.